Breakfast time was filled with an air of excitement. My grandparents were speculating as to what time it would arrive. Nana was quick to clear the table and begin the washing up. 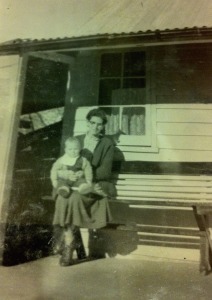 My Nana, Violet Exter, sitting outside the Wash House – 1960

“They’ll be here by eleven,” she said.

“I’ll get the dinner on the go,” said Nana. “I’d like to make a Queen Pudding,” she added.

“Going all out are we?” said Grandpa, grinning. Nana shot him a look.

The kitchen began to fill with lovely smells as Nana prepared the midday meal – dinner as it was known in the country back then. Her best dinner set, seldom used, was brought out along with her best cutlery set.

“Wedding presents,” she told me.

Along with the tablecloth she used when the visiting parish nuns came to eat with us. Cloth serviettes were used. I was in awe. Thoughts of the Queen coming floated through my mind. I’d have to wear my white shoes.

Time passed, the clock was checked. “They are running late,” said Nana. I had a momentary vision of ‘them’ running to our house and said as much. “Don’t be silly,” said Nana.

The sound of an engine filled the kitchen. Nana smoothed her hair and apron and went out to meet them. I hung back to watch from the kitchen steps.

A man and a woman got out of a white utility truck. Smiles and handshakes filled the next few minutes.

Grandpa walked up from the barn smiling a welcome. “I see you got here,” he said.

“Yes,” said the man, “we hit some traffic coming around the mountain road, slowed us down a fair bit.”

Grandpa said he’d thought as much. “You can’t get much of a move on once you get behind a truck,” he said. “It’s a two hour drive at the best of times.”

All eyes were on the utility. Grandpa helped the man take off the tarpaulin, which covered the tray of the utility. There it was – a brand new washing machine, standing proudly in all its white glory in the back of the utility.

The two men manoeuvred the washing machine down a ramp to the safety of the driveway, and wheeled it slowly to the washhouse.

Nana had been preparing for this and it was no trouble for the men to wheel the washing machine to the designated spot. Every one left the laundry to have a cup of tea. 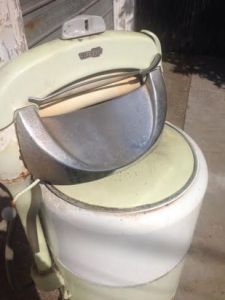 The woman showed Nana a book with a photo of the washing machine on it. They talked about this over their cups of tea and fruitcake – Nana liked to serve fruit cake to guests. The man was talking to Grandpa about the machine as well.

After they’d finished their tea, we all trooped down to the laundry. Hoses were attached, the newly installed electrical points checked and the water was turned on. The machine began to fill. The woman had a packet of “Lux Flakes” with her, she showed Nana how to mix them with some hot water in a container before adding them to the machine. The water in the machine became very frothy. Slosh slosh went the new agitator.

Nana had a cream woollen blanket ready to be washed. The woman showed Nana how to put the blanket in the washing machine, and then turned it on. The agitator began to move the blanket this way and that. My grandparents looked on, amazed.

The woman and man demonstrated how to feed the clean blanket through the wringer, into the waiting laundry trough. They showed my grandparents how to drain the water and then refill the machine with clean water. The blanket was rinsed and hung on the line to dry.

My grandmother thought it was too good to be true. She went on to tell about the years she had boiled her washing in a kerosene tin on a fire in the early years of her marriage. She’d graduated to a copper boiler over a fire in the washhouse, where she’d stir the washing with a stick, and then lift it into the rinse trough. Years later she’d been able to buy a hand wringer.

She looked at the blanket on the clothesline with great joy. Her hands had been greatly affected with a crippling form of arthritis over the past couple of years. She was happy to think she could manage her washing again.

Dinner was a great success. The woman and man praised my grandmother’s corned beef, and the Queen Pudding was pronounced the best they’d tasted.

The man and the woman talked more about the washing machine and had more tea and cake as the afternoon wore on.

“We’d like to be back in town by five p.m. “said the man. We waved goodbye to them as they drove out the drive and over the hill on their way back to Hobart. It was all part of the service.

Nana and Grandpa took the blanket inside to air. They were very pleased with their purchase. Nana’s washdays were much easier from then on.

I managed to get my fingers caught in the wringer just once. But Nana had been watching when the woman had shown her how to release the wringers.

No harm was done to my fingers, some to my ears as I was told how I had almost given her a heart attack.

1 thought on “The New Washing Machine”